The excitement was palpable; I was all smiles when my dad gave me the key to my new bike. It felt like I was given the key to an all new life full of fun, freedom and independence. It’s a memory I cherish even today and I’m sure 23 Million other Indians would’ve shared similar sentiments this year. In India, a new bike is sold every 2 seconds; a new car every 12 seconds.

One of the early trends that’s happening now is making the whole automobile service experience seamless and hassle-free – right from discovering a trusted and credible service center to getting the vehicle delivered back after service completion. A vehicle owner doesn’t need to check the service booklet and call up the service center to book a service anymore; he/she can do that at a single tap on his/her mobile screen. Vehicle owners can discover service providers in the vicinity, compare them based on price and book the service directly. After booking the service, they can view and track the status of the service booking real time, get the cost estimate for the service, chat with the service expert at the service center, know the estimated date and time of delivery and can also pay via the mobile phone after service fulfillment. Even some of the service needs which require immediate assistance like breakdown or tyre punctures are being handled by identifying the vehicle owner’s GPS coordinates. By knowing the exact location, it’s possible to send out a trained mechanic available close by to assist immediately. Imagine the time and effort that’s saved.

The biggest challenge in this industry, as perceived by vehicle owners, is information asymmetry. More often than not, vehicle owners feel that they’ve been meted out a raw deal by the service provider and they feel helpless. This challenge is being addressed at multiple levels. Having user generated reviews and ratings for each service center under different parameters is one solution. Getting accurate quotes for a specific repair job from many service centers even before commencing service and choosing the best one is another. Equipping users by providing interactive and engaging content about their vehicles and their needs is one another solution.

On the other hand, service centers are also reinventing themselves to cater to the needs of the internet-savvy customers. While some can afford to spend time and money on building an online presence and ramping up technology, that’s not the case with all service centers. Here’s where a common level-playing technology platform that caters to everyone in the ecosystem to market their offerings, showcase their quality and engage their customers will play a pivotal role.

Exciting times for the Auto Service industry are here again and for people who are involved in this hands-on, I’m sure the excitement is palpable.

Currently available in Chennai, GoBumpr! is the one stop mobile app for all Car Service and Bike Service needs – from booking a scheduled service to getting on-the-road breakdown & tyre puncture assistance 24×7! 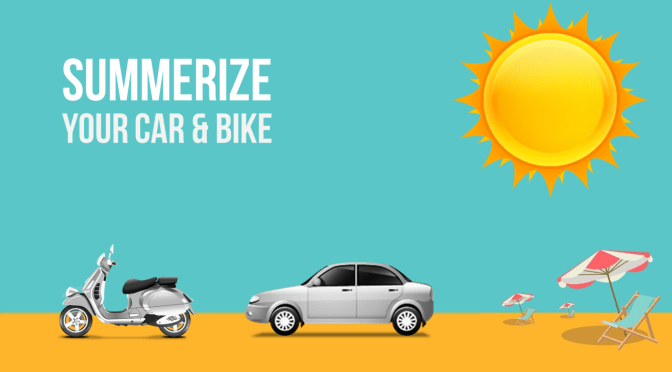 ‘Feeling the heat’ has become quite a literal phrase nowadays with temperatures skyrocketing to 40 degree Celsius effortlessly. As we take care of our physical well-being by switching according to the climatic conditions, maintenance of one of the most important mechanical contraptions – the cars and bikes – becomes a necessity rather than a luxury.

Whenever the term ‘heat’ is uttered in mechanical jargon, ‘friction’ automatically comes into play. Got the drift? Yeah, this exactly is about the TYRES. There are simple yet effective ways to prevent tyres from blowing out easily. As we see in even the simple vehicles like bicycles, the tyres tend to protrude a bit on the outwards when the pressure becomes less. This will induce uneven load distribution in the tyres causing wobbling; continuous operation of the cars and bikes in this condition would result in a tyre tear. High pressures would mean improper response to the control inputs (braking, acceleration, etc.). Don’t tire the tyres until the tyres tear themselves.

Like we recharge ourselves with jars of juices and tumblers of water, it is important to maintain the liquid levels of the vehicles too. Guess what? LUBRICATION. Since all the oils that are used in the systems tend to be volatile, it is significant to replace them by keeping track every now and then, particularly during high temperatures. Standard vehicle techniques say that it is better to replace oils after every 5,000 kilometers or 3 months (whichever comes first), and the oil filters after every 12,000 kilometers for cars, and the engine oil be changed after 3,000 kilometers for their two wheeler counterparts.

BATTERY is one significant part that always aids in the proper functioning of numerous accessories. Similar to the checking of the liquid levels in the battery of our UPS systems in houses, it becomes mandatory to follow the same in case of car batteries also. Yo6u don’t want your wiper or headlights to just not work when you need them badly. Make sure you take good care of your battery.

With the amount of pollution we are facing particularly in a densely-populated country like India, it becomes noteworthy to stress a bit on cleanliness. Oh man, the AIR FILTER! This part may get clogged particularly after long drives in highways due to the amount of dry dust that fills in the cavity of it. Make it a point to dust them out, or else you might feel the heat of it, quite literally!

One may get bored and stressed at the never-ending signals, particularly in the city. Throttling of your vehicle in the stationary condition would result in overheating of the engine. More than being vroomed, let the automobile be groomed.

Having discussed about the driven equipment, there are also certain prerequisites for the driver. HELMETS have become mandatory for a good reason, yet there are certain precautions to be followed while wearing one. Do ensure that the head gear has adequate free space between the nostrils, mouth cavity and forehead. Suffocation problems may arise due to congested helmets. Most importantly, it is primary to have an absorbent material as a covering inside the top most layer of the inner surface; this would ensure that the sweat and liquids get absorbed well, leaving you fresh (at least in the appearance perspective, though it needn’t be mentioned that drivers will be gasping after a long drive in this summer :P).

There are also other components like radiator, air conditioner and others that require diligent care and trustworthy maintenance. More than anything, remember that ‘Every action has an equal reaction’. One general piece of mind would be to opt for short travails during noons and to make use of the span between 6 PM and 9:30 PM for huge passages. As the summer gets grimmer, enjoy your rides by taking sides as per the environment. Beat the heat and drive safe!