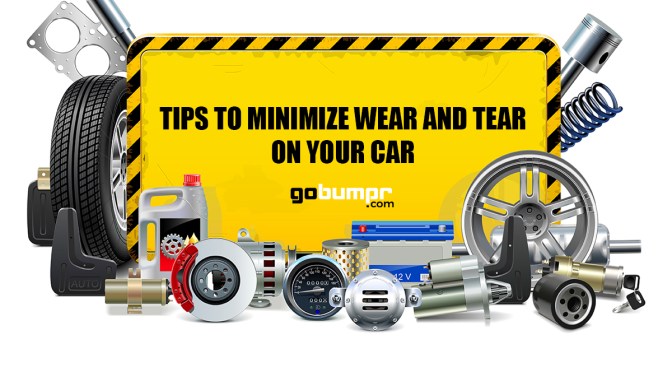 Preventative care, careful driving and regular maintenance all contribute to your car’s longevity, making it stay longer on the roads than in a garage. Proper care also helps you save a lot of money in the long run. Here are a few tips on how to make sure the wear and tear in your car is minimized.

Stick to your maintenance routine:
Familiarize yourself with your car’s maintenance schedule and stick to it. As your car age, more maintenance is required and car manufacturers always recommend regular service intervals. If you don’t do a regular service on your car, you run the risk of causing damage to your engine and other parts because service centres know what needs to be checked and replaced with time, such as spark plugs, oil, filters, etc. Never miss an oil change:
Oil is the lifeblood of your engine and over time the motor oil begins to degrade and lose its lubricating and cooling properties potentially damaging metal-on-metal contact. Regularly changing your oil and filter can save you in the long run, the failure of which could have you replacing your whole engine!

Warm-up!
Everyone is always in a hurry and it’s not uncommon to want to jump into our cars and rush off. But experts recommend that it is important to give your engine a minute or two to warm up. This helps your engine oil heat up and lubricate all the parts. It’s also best to avoid higher RPMs and speeds until the engine is properly warmed up and running at normal temperature.

Give your brakes a break:
Prolong the life of your brake pads and discs by easing up on constantly using them. The safest way to do it is by slowing down. The faster you drive, the more you will need to step on the brakes sharply. Keep a safe distance between the vehicle in front of you, which will give you more time to come to a slower stop without having to jam on the brakes often. Your car’s engine oil varies depending upon the vehicle model. You need to replace the oil at least once after a year has passed for normal cars, and after 6 months for turbo-engine cars. This is because engine oil deteriorates faster if the car is driven at high speed, due to friction. But as engine oil deteriorates over time, it is also necessary to change the oil element according to the period of use as well. Normal Operation:
In this case of normal operation, there is no particular problem in the oil change and it depends on the driver who drives the car in a manual speed and with the proper driving.

Not Too Much Driving:
In this case, you need to replace the oil at least once a year for normal cars, and after 6 months for turbo-engine cars. If you drive your car once in a blue moon like 1-3 times a month the engine oil deteriorates and the mileage is also reduced. And if you are a diesel engine user then you will be facing an ignition issue as well.

High-Speed Driving:
In this case, you should replace your oil early, because engine oil deteriorates faster if the car is driven at high speed. So the deterioration of the engine oil will also increase.

It is always better if you change your car’s oil regularly as recommended by the manufacturers, as it can increase your car’s performance as well as it increases your car’s mileage. We all love to buy a car, but the ultimate thing is to maintain our lovely car properly. But while the engine is the heart of the car, the oil is its blood. It is the biggest responsibility for every individual to know the variants of oil which are used for your car’s engine

What is Oil Viscosity?
Viscosity is a measure of the resistance of a fluid’s flow. The thicker the oil, the slower it will flow. The oils fall into viscosity grades 10W-40. 10W bit (W=winter) simply means that the oil must have a certain maximum viscosity or flow at temperature. The lower the “W” numbers the better the oil’s cold temperature performance. What are the Different types of oils?

Fully Synthetic:
A fully synthetic oil is mainly preferred for fuel efficiency and better mileage. You can examine the product is fully synthetic or not by its SAE (Society of Automotive Engineers) rating will be 0W-30 or 0W-40 or 5W-40.
*0W-30: Fuel economy savings
*0W-40: Enhances engine performance and power
*5W-40: Ensures good cold starting

Synthetic Blend:
Synthetic blend oil is very cheap to get, but it is not highly recommended for your car’s engine. Because when it comes to fuel economy and performance, it is not up to the mark; you will have to change the oil very often. For a better way, we can use semi-synthetic which is a combination of motor oil and synthetic oil. It provides better protection against engine wear. The SAE rating for semi-synthetic includes 5W-30, 10W-40 and 15W-40.
*5W-30: Better Protection
*10W-40: Good Protection after starting out
*15W-40: Better at reducing engine wear

Conventional Oil:
Conventional oil is the origin for motor oils, and later, it was produced by the base oils of hydrocarbons, poly internal olefins, and polyalphaolefins. It’s SAE ratings are 10W-40 and 15W-40. Conventional oil provides basic protection for most engines and it’s the ideal oil for people who have very ordinary driving styles. And it’s cost-effective.
*10W-40: Basic protection for a variety of engines
*15W-40: Oil needs to be changed more often

For better performance of your engine. Oil check should be done every week as recommended by the car manufacturers. Oil consumption depends on the model of the car and driving style. Every car comes with some metal parts in the exterior, and fibre in the interior. It is very common for these parts to start producing noises over years of use, largely because of vehicle usage.

Engine knocking sounds:
This is heard when you drive your car by changing gears or by acceleration. It is caused because the early ignition of the air-fuel mixture has not produced the minimum power at the right time. In this case, check your engine oil level. If you find any faults, take it to your nearest service centre. Sometimes proper tuning of the engine could fix this issue.

Pinging on cold start:
This noise is caused by the fuel mixture in the engine cylinder being ignited too early by the heat of compression. We can hear this noise during acceleration of the vehicle. As the engine gets older, it will start to ping more on cold start.

Loud squealing:
Loud squealing noises come from the internal engine and is caused by the belts. In a car, there are multiple belts: one for power steering pulley and one for the AC compressor. The belts generally slip from the pulley because it’s worn out. This sound is louder when you start the engine cold and fades away as you accelerate.

Grinding noise:
This is one of the common engine noises heard frequently. This noise is caused by the driver when shifting the gears; because when you apply the gear with half clutch, then there will be a grinding noise. If you are doing so, avoid it because it can damage the entire engine system.

Check the oil level regularly; because in a car, noises arise primarily because of the low level of oil. The other common thing is a bad belt, which can cause squealing noises. If you find worn-out belts, it’s time to replace them.